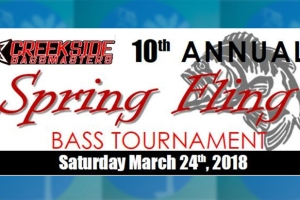 By Russ Scalf     Dec. 28, 2017 Lowcountry angler Robert Boodle was frustrated by the lack of affordable options in the marine electronics and retail tackle industry. So, in the fall of 2016, he did what came naturally and designed a solution. Boodle, the owner of Palmetto Outdoorsman, is […]

By Russ Scalf     Dec. 17, 2017 Booyah Bait Company introduced the Booyah Flex II square bill crankbait this past summer and it definitely has a place in your tackle box. After putting it through the paces on Santee Cooper and the Cooper River, here are some of the […]

By Russ Scalf     Dec. 3, 2017 The Cooper River Bassmasters hosted their 10th annual Toys for Tots Bass Tournament at the Cypress Gardens Boat Landing in Moncks Corner on Saturday. The event drew a stacked field of 69 teams, featuring some of the Low Country’s best anglers. Scott […]

GOOSE CREEK — The team of John Campbell and Kyle Welch boated another winning stringer of Cooper River bass to take the win at the Carolina Anglers Team Trail Qualifier 2, Sept. 23, 2017. The pair blew away the competition with 18.20 pounds to earn the victory. “Fall […]

Mark Hodge Jr. – Aug. 28, 2017 It’s August, it’s HOT and it’s humid. But don’t worry; fall is just around the corner. Most Lowcountry anglers spent their dog days floating down the Cooper River. It’s where all of the local open and trail tournaments take place each […] 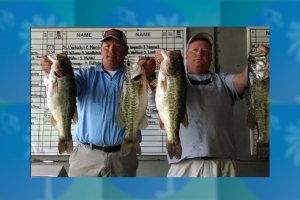 Russ Scalf – Aug. 13, 2017 As sure as the summer will draw to a close, Ryan Bowles will catch his limit on the Cooper River. The Pineville native recently added another accolade to his impressive resume on the Cooper. Bowles and teammate Deron Heimerdinger took home the […] 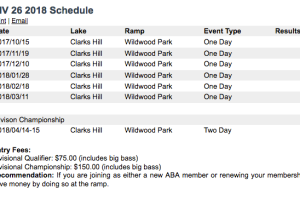 In case you missed it, Divisions 26 and 96 of the American Bass Anglers have release their 2018 schedules. Good luck!